Mohamed El-Erian has had an extraordinary career as an investment analyst, investor, and market commentator. His ‘new normal’ concept was prescient, provocative, and has proven out. Agree or disagree, his go-forward thoughts contained in this bracing book are well worth considering.”

Achieves the nearly impossible: It takes complex financial issues and events and makes them both enlightening and entertaining. It’s a must-read for anyone who cares about the global economy and its future, raising critical questions, exploring all the relevant topics, and offering sound policy recommendations. It’s a terrific book.

May well be the only book you need to read on how the global financial system works, the serious trouble we may be in, and what to do about it. El-Erian’s gift for clarity and his use of compelling examples make important economic issues accessible.”

Today’s global economy is beset by low growth and rising inequality. By looking at the tools now being used by the world’s major central banks, Mohamed El-Erian shows how we can instead promote inclusive economic growth. This is a must-read from one of the most astute financial analysts of our time.”

Mohamed El-Erian understands markets and economics, and he clearly and coolly articulates the forces that created the current global slowdown and the dangerous fork in the road that the world economy is approaching. The road ahead could lead to a perilous U-turn or more durable, inclusive growth. The good news, as El-Erian convincingly argues, is that policymakers, businesses, and the rest of us still have our collective hands firmly on the wheel and can steer the economy in a better direction:’

An indispensable guide to understanding the rapid expansion and current role of central banks in the global economy, as well as the challenges and opportunities that they will confront in responding to future economic shocks:’

The Only Game in Town says it is about central banks, but it really is about so much more: everything from the investment strategy needed in today’s macroeconomic environment to the hard choices about taxes and public works that our politicians face to the economics underlying the still relevant new normal’ (which he coined). El-Erian has an incredibly rich worldview, far greater than the sum of his impressive diverse experience, and seeing today’s world economy through his eyes offers a real education.”

This book is a must-read for anyone interested in the global economy. A masterful account of how central banks became the only game in town after the global financial crisis but also how other structural and fiscal policies are necessary to resolve key global economic issues. El-Erian is the best thinker on the key global issues of our times.”

Mohamed El-Erian knows the global economy as an investor, a public servant, and an analyst with a rare ability to grasp its essentials. He has an urgent message to convey here: Central banks cannot [continue to] carry the global economy on their backs for much longer without a high risk of a very bad global outcome. If he’s right—as he has often been before—all of us, governments, business, finance, and individuals, need to understand why and how to take evasive action.”

Widely regarded as one of the most astute observers of global economic trends, Mohamed El-Erian is famous for having coined the now-ubiquitous phrase ‘the new normal.’ Five years ago, he was worried that the global economy might take years to regain its footing. Now El-Erian worries it could fall off a cliff. The good news from this book is that if policymakers get their act together, things could be a lot better. The bad news is that this seasoned and influential veteran isn’t at all sure this will happen. The Only Game in Town is simply a must-read for anyone trying to understand how the global economy might unfold in the next five years.”

In his next book, The Only Game in Town, Mohamed El-Erian has done several important things superbly. First, he has presented the first really comprehensive assessment of the multiple challenges to sustainable and inclusive growth facing a wide range of countries and the global economy. Second, he does it through the illuminating lens of central banks and monetary policy— with few exceptions, the only game in town. Third, he then deftly and insightfully dis-sects the limits and risks of this almost ubiquitous one-handed pol-icy response. And fourth, he argues persuasively that this is a journey we cannot continue; that we will break either right to a much superior level and quality of growth, or left to declining performance and rising instability. He then suggests mind-sets that will help everyone—policymakers, and the rest of us—navigate this complex and uncharted territory. It is a tour de force.”

MOHAMED EL-ERIAN KNOWS HOW TO WORK A ROOM. I got to witness the former PIMCO CEO in action at the annual Global Indexing & ETFs conference in Scottsdale, Arizona, in December. I had been invited to do a fireside chat with El-Erian — currently chief economic adviser at Allianz and chairman of President Obama’s Global Development Council — following his keynote address at the event, which is hosted by Information Management Net-work, a sister company within the Euromoney Institutional Investor family. We had agreed to meet before his speech to go over what he wouldbe saying and my line of questioning. El-Erian, who had flown in from his Laguna Beach, Cali-fornia, home the previous day, found me near the registration desk, not far from a six-foot-high placard, displaying his face, that urged conference-goers to attend his keynote that morning. Not that they needed prompting. Investors have been hanging on everyword El-Erian utters since June 2008, when he published When MarketsCollide,aNew YorkTimes best seller that explained the structural changes behind the U.S. subprime crisis and offered advice on portfolio man-agement, asset allocation and risk management in a world headed toward a global credit crunch. As El-Erian and I stood at the back of the Hyatt Regency ballroom waiting for him to be introduced, I learned that he wrote the 304-page book in just nine days. By the time El-Erian took the stage, the room was packed. He started his speech by describing how central banks have become “the only game in town” when it comes to economic policy — a reference to the title of his soon-to-be-released second book. The problem, he explained, is that central banks don’t have the power to make the kind of changes needed for Allianz.

Real economic growth: investing in infrastructure, reforming corporate taxation and labor markets. Politicians are required for that, but Washington has been frozen for the past six years. “Central banks don’t like being the onlygame intown,” El-Erian toldthe rapt audience. “But theydon’t know howtoget out of it.” The artificially high asset prices caused by zero interest rates and central bank purchases have created what El-Erian calls liquidity delusion. Investors, he warns, should be pre-pared for increased volatility as a result of the divergence in policy between the Federal Reserve and the European “Central banks don’t like being the only game in town, but they don’t know howto get out of it MOHAMEDEL-ERIAN Central Bank, the Bank of Japan and the People’s Bank of China: “Volatility will lead to patches of illiquidity that will accentuate volatility.”

But all is not lost, El-Erian says. The key for investors is to remain very nimble and take advantage of volatility when asset prices overshoot. He suggests treating cash as part of the strategic allocation of a diversified portfolio — advice the longtime investor has put into practice for himself. El-Erian has had the bulk of his money in cash since last spring.

Why Startups Should Be Wary Of “Tourist” Investors February 4, 2016

ESCAPING THE NEW NORMAL: A REVIEW OF THE ONLY GAME IN TOWN BY MOHAMED A. EL-ERIAN March 8, 2016

El-Erian Calls on Governments to Sustain and Broaden Recovery February 7, 2016

Business bookshelf: 'The Only Game in Town' February 6, 2016

Twilight of the Central Bankers April 6, 2016

The Only Game in Town: Central Banks, Instability, and Avoiding the Next Collapse - book excerpt January 26, 2016

A Reading List of Tell-Alls, Strategic Plans and Cautionary Tales in Finance July 4, 2016
A Warning on the Federal Reserve’s Limits February 16, 2016
‘The Age of Stagnation’ and ‘The Only Game in Town’ January 27, 2016

CENTRAL BANKS: THE ONLY GAME IN TOWN? REVIEW BY LYRIC HUGHES HALE March 9, 2016 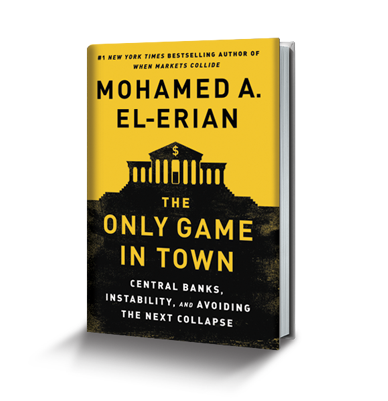